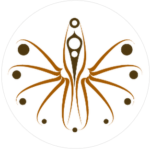 Whisk the yoghurt, goat’s cheese and 1/3 cup water in a mixing bowl until smooth. Whisk in 3 tablespoons of the oil, the parsley and scallions. Season with salt and pepper.

Heat an outdoor grill or large cast-iron grill pan over medium-high heat. Brush the pork tenderloin with 1 more tablespoon of the oil and sprinkle liberally with salt and pepper. Grill until charred on all sides and the internal temperature on an instant-read thermometer registers 135 degrees F, 12 to 16 minutes.

Meanwhile, brush the cut side of the plums with 1 more tablespoon of oil and sprinkle liberally with salt and pepper. Place the plums, cut-side down, on the grill and cook until charred and the top of the flesh is just softened, 3 to 4 minutes. Transfer to a plate. Some of the flesh might stick to the grill but that is okay, the plums will still have a nice, slightly charred flavor.

Remove the pork from the grill and rest for 10 minutes. Slice thinly on a diagonal against the grain. Sprinkle the slices lightly with salt.

Toss the baby rocket with the remaining oil and the lemon juice in a bowl. Season with salt and pepper.

GET VEGAN DESSERTS TIPS AND TRICKS SENT DIRECT TO YOUR INBOX

Every time I develop a new vegan dessert or organise an event or cooking course I’ll send you details and I promise not to spam you. I am GDPR compliant and you can un-subscribe at anytime.

I have made a selection of short videos of vegan pastry courses for kids to help them stay active during these difficult times. Thay can be found here.